Circuit breakers tend to gather dirt, moisture, and contaminants while in service. Their insulation systems can also weaken due to the heat created by arc interruption, especially if they are not routinely maintained. Circuit breakers used in hostile environments can be exposed to various corrosive contaminants, such as hydrogen sulfide (H2S in oil and gas well equipment) or chlorine (water treatment plants). These aggressive chemicals corrode and damage not only the insulation of the breaker, but also its metal components. 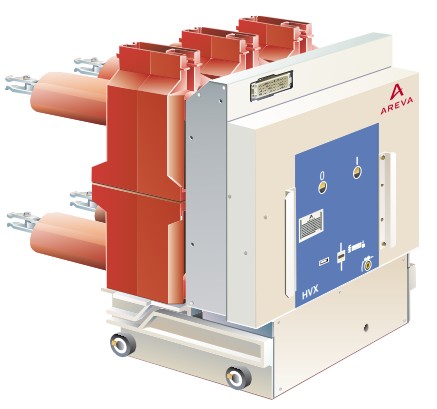 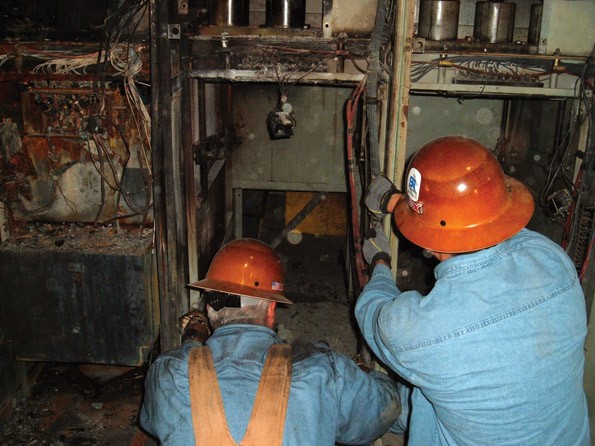 Summarize some accident investigation, following reasons will cause the fire disaster:

A thin layer of insulating oxide covering the area of a single microcontact would have little effect on the conductivity of the contact as a whole. As soon as the oxide layer extends to a significant number of microcontacts, the current-bearing area would reduce, thus increasing its resistance. Increased resistance will increase the contact temperature, leading to its destruction.

All ambient atmospheres that contains gases capable to react with the contact’s material, such as O2, SO2, H2O, H2S, etc., would be favorable to producing oxide layers even though the contact is closed. With time, the gas would succeed in penetrating and reacting with the contact surface to degrade its characteristics and to increase its resistance.

following shows the resistance value increasing with time. As we can see, the resistance change is not significant until a certain point in time where the degradation increases fast. Similar results are obtained for copper contacts in oil. 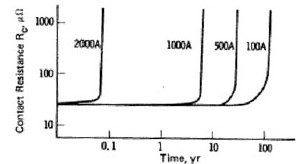 These results show interesting behavior and indicate the urgency of a maintenance intervention when a contact’s resistance starts to increase.

Mechanically, it can be due to the movement and friction of the contacts and electrically due to the arc effect (mainly the make-break contact). Contact wear directly affects the contact resistance and makes it increase dramatically if the wear is in an advanced state.

A form of accelerated oxidation is possible, if the contact surfaces experience a cycling movement relatively to each other. For example, the contacts would not close at the same area each time. 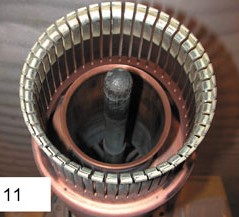 This phenomenon was noticed long ago but its magnitude was recognized only recently. When a contact moves from its previous position, a part is exposed to the ambient atmosphere. An oxidation layer then forms. When the contact goes back to this position, it breaks the thin layer and pushes it aside. This phenomenon repeats many times until the oxidation layer becomes of a significant thickness, enough to increase its resistance.

The resistance increases rapidly right after it starts to change, but accelerated.

As known, the resistance R is function of the contact material’s resistivity p and area S, (R= p / S).

S is the sum of all contact points areas.

The contact points areas are function of the applied force F and the material hardness H,

(k is a constant)

If F decreases, S decreases as well and R then increases.

F can decrease due to different factors, for example:

Spring materials are thus an important element to take into consideration. By the same logic, an important precaution to take is to avoid letting the spring be a current path, as the increase in its temperature would cause a weakness of the resultant force F.

Above elements affecting the contact resistance, and will let the moving parts in electrical circuits generate heat. If heat is exceeded designed temperature tolerance range, it can cause fire and other hazards. How can ensure that your customers’ expensive circuit breakers will be ready to respond if there is a fault on their electrical system? The only way to know for sure is by performing the required maintenance, which includes electrical testing of the circuit breakers. But recent maintenance requires additional manpower.

We found that the early symptoms of a fire accident are reflected in the abnormal fluctuations in the temperature of the contact, so specially designed for the contact real-time temperature inspection equipment BJ-W3000 wireless monitor for electrical contact point. 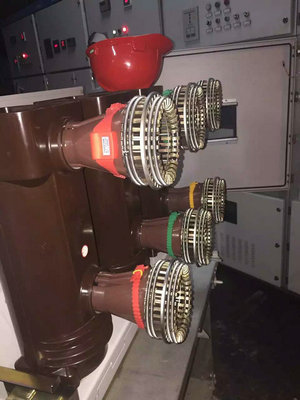 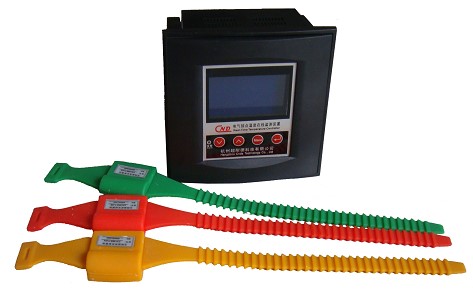 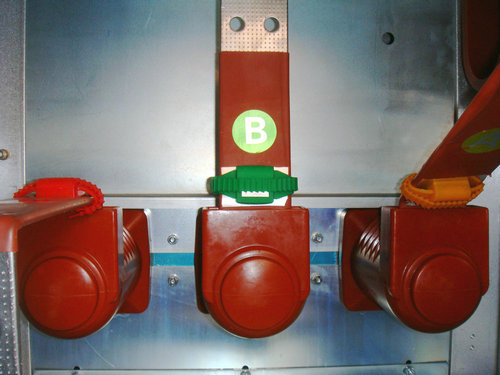 It includes one based unit (96*96mm mounting size), and 3~12pcs wireless remote probe for collect temperature data, use a silicone bracelet can easy install in any important contact point, the remote probe completely waterproofs and dustproof design (IP65), powered by built-in battery to meet at least 3 years of service life. It will automatic upload the detect temperature data to base LCD screen. Base unit for daily staff inspection work, built-in buzzer can remind the inspection staff when the system detects abnormal temperature fluctuations.

System feature and working principle The use of residual current monitoring is a pre-fire alarm system, main advantage is to “avoid” losses, while the traditional general fire automatic alarm system is to “reduce” losses. Therefore, no matter whether it is a new construction or reconstruction project, whether or not a general fire automatic alarm system is installed at the scene, it is still recommended to install an electrical fire monitoring system. The system measures the two key physical parameter: Residual current and Temperature. Let’s take an example via TN-S system. A/B/C/N wiring through residual current transformer, when there is no leakage in the system, the vector sum of the current flowing into and out of the CT is zero, CT secondary side current is also 0; when earth leakage occurs, the vector sum of the current flowing into – out CT is equal to the current flowing away from the earth, that is leakage current. Temperature sensor generally uses Pt100. It can achieve stable temperature measurement and a large range, in system for monitoring cable temperature and ambient temperature. If the two monitored physical parameter exceed the preset value, an audible and visual alarm signal will be issued and sent to the background electrical fire monitoring equipment. 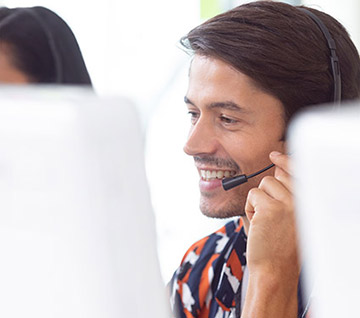